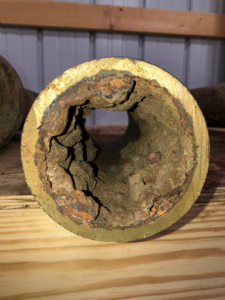 Cast Iron pipe damage. If you live in South Carolina and your home or business was built before 1975, there is a good chance that it may contain a cast iron plumbing system that has failed or is the process of failing.

With cast iron pipes, they can corrode and deteriorate over a period of time. Cast Iron pipe deterioration in turn can lead to the following:

Failure of cast iron pipes may cause property damage, but your insurance company could possibly deny your claim, claiming “deterioration,” or “water damage” exclusion. Insurance companies may accept your claim, but offer a low settlement.

Cast iron pipe have an approximate life span of 50-75 years under ideal conditions. In non-optimal conditions, cast iron pipes may only last 25-50 years. According to the American Society of Civil Engineers leaking pipes account for an estimated 7 billion gallons of water, each day. They say that the main culprit of this is the age of the water pipelines. The average age of a broken water main in the U.S. is approximately 47 years. For homes 50 years or older, this means that their pipes are nearing their breaking point.

Nationwide, an estimated 76 million homes have cast iron pipes that must be replaced.

Pipe materials break down over time due to various reasons. One of the most frequent cause of pipe deterioration is corrosion. Common sources of corrosion are hydrogen sulfide and other acids, as well salt and moisture-rich environments—conditions prevalent in South Carolina—can accelerate corrosion and cause pipes to fail earlier than expected

Other causes of pipe corrosion can include

Old, broken cast iron pipes have some noticeable tells, including:

Contact us today about our sewer repair and our sewer pipe relining services today!